The exhibition takes us back to the 14th century, when Tangermünde (in the years 1373-1378) was, in addition to Prague and Nuremberg, one of the centers of power in the Holy Roman Empire.
Tangermünde was one of the favorite places of Emperor Charles IV. From there he governed the Mark Brandenburg, which he had conquered for the Holy Roman Empire and as an inheritance for his son Wencelas.

The Bohemian Kingdom and the Mark Brandenburg were important members of the Holy Roman Empire. The rulers of the two countries had suffrage and were carriers of important functions.

In 1374, the Mark Brandenburg officially gave its lands to the Bohemian Kingdom. This took place in Tangermünde.

Because of this, the period of the reign of Charles IV. in Tangermünde is an important part of the German and the Czech history.

The exhibition is supported by the Czech Ministry of Culture. 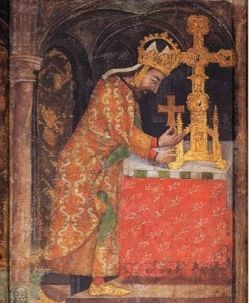