The mission of NKP Ležáky is to care for keeping the memory alive of the extermination of the hamlet of Ležáky and the suffering of its inhabitants, who, on 24 June 1942, fell victim to Nazi outrage for their support of the resistance movement. Also part of its mission is to maintain the name of the hamlet of Ležáky as a symbol of the Czech fight against Nazism and the victims of war crimes.

Immediately after the war, the area of the hamlet was furnished with intuitional monuments consisting of heaped stones supporting slabs, each with the name of the family living at the respective place. Ležáky soon turned into a place of pilgrimage, with a cross erected on the Zárubka hill as its physical focal point.

It was the cross that became a symbol dominating the environs right in the first comprehensive design of the memorial site. Architect Ladislav Žák, who created the design, chose the cross as a motive to be incorporated into all Ležáky gravestones.

In 1946-7, Žák divided the area of the former hamlet of Ležáky into the following constituents: two entrances into the area, the President's stand, the stand with the sculpture of Ležáky victims, the dominant memorial - the chapel on the Zárubka hill, the gravestones of the exterminated families at the places where their respective houses had been and a separate gravestone in the area of Švanda's mill and also memorials standing apart dedicated to people involved in Ležáky tragedy including the paratroopers engaged in the Silver A operation.

Ladislav Žák wrote about his approach that he had "conceived the task of landscaping the memorial site and building Ležáky in the spirit of the guidelines of the new landscape architecture, of which he is the creator and a theoretical as well as practical active worker. The principles of the new landscape architecture, pronounced and described in detail in the present author's work "Residential Landscape (...) will be able to be implemented in a larger scale in the landscaping of the Ležáky memorial site. It is a solution that differs significantly from the present approaches, a solution aimed at the closest possible connection of all buildings and artificial alterations with nature and the landscape." (1947)

Thus, the whole concept can be considered a vast landscaping project, a blend of natural and artificial elements, which the architect was interested in even before the war and which he later called a residential landscape. The concept of the Ležáky landscaping shows an evident endeavour to maintain the natural character of the area while addressing its commemorative aspect at the proper places. Bearing a carved air cross and the family name, the monuments of each family in the shape of stelae are set on plinths following the contours of their respective houses.

The execution of Žák's design took place in two phases, nevertheless, the project has never been fully completed. The first phase took place in 1948-51, starting with the monuments for the inhabitants, so-called graves-houses. The first thing was to set the prepared stelae on the plinths in the following order: the monument in the Ležáky quarry in Ležáky (Stantejský), three monuments at the Hluboká quarry (brothers Vaško, the machinist Svoboda) and the monument of Constable Kněz near Habroveč.

There were three variations of the monuments as designed by Žák: a vertical one, (for individuals), a longitudinal one (for graves-houses, or for families) and a special one for Švanda's mill.

Also two family houses were built for the only two survivors, young sisters Šťulík. They were built in Včelákov to the same design as the new houses in Lidice.

As early as 1948, Žák presented the Society for Renewal of Lidice and Ležáky with a design of a "big memorial", i.e. a chapel on the Zárubka hill. The ground floor was meant to comprise a sarcophagus containing the ashes, then the area of the chapel itself and a place for an altar; opening to the valley, the natural area in front of the chapel was meant to be a natural "nave" for the attendants of the services.

In the early 1950s, the development of the memorial site was entrusted to the Regional Council in Pardubice. The idea of a chapel was abandoned; it surely was due to several factors, e.g. enormous financial costs, a change in the social climate after February 1948 and also the findings of the expert committee that questioned the feasibility of the construction.

Despite that, the Regional Council approached the architect Žák again in the second half of the 1950s to finish his vision for the memorial site and remake it to suit a more limited budget. This second phase lasted till 1961, but only small constructions were built, the most conspicuous of them being a five-sided granite pyramid with an inscription in several world languages mentioning the Ležáky tragedy. The intended museum, restaurant and sculptured monument remained confined to the design drawings.

From the nationalization of the building industry till 1988, any adjustments were negotiated with and implemented by the state-owned company Stavoprojekt. The architects Driml and Vaněk started with the stands and the entrances to the memorial site, because there were only makeshift ones there at that time. Then it was also decided to build a museum, which was finished in the 1970s.

When the Pardubice company Stavoprojekt was in charge of the development of the memorial site, i.e. circa twenty years, it was stressed several times that a satisfactory solution for landscaping and tree planting was needed; at first, their interventions continued Žák's design, although they did not always come to fruition. Also a renewed Ležáky pond has had a strong impact on the landscape. In the 1990s, the incomplete solution for the area was revisited by the architecture studio Zelený dům. The period after Žák can be characterized best as a period of many reviewed and only partially completed projects.

The memorial site in Ležáky was listed as National Cultural Heritage in 1979 and again in 1995. In 2008 the government decided to put the Lidice Memorial in charge of the administration of the Ležáky area. Besides maintenance works also a "simplified greenery project" was proposed, which encompassed the thinning of woody plants and the lightening of some sighting lines. However, it was implemented only marginally, mainly due to private property rights to certain parts of the area. Also peculiar for this period was the cooperation with Bohumír Prokůpek and the studio Pinkas - Žalský, who had also worked in Lidice. Included in the design were a multi-purpose building of the museum on the site of the former stone quarry and a chapel at the foot of the Zárubka hill (the use of both sites corresponds with the original design by Žák). However, none of those buildings was actually built. The conceptual design of the chapel was later used as a basis in setting the conditions for the public tender for the completion of the Ležáky chapel that took place in 2011-2.

Along with the last concept of the Ležáky area development, the creative team Prokůpek - Pinkas - Žalský was approached to create a new exhibition, the curator of which was the historian Vojtěch Kyncl. Apart from the interior of the museum the architects dealt with several elements of street furniture laid out within the Ležáky valley. 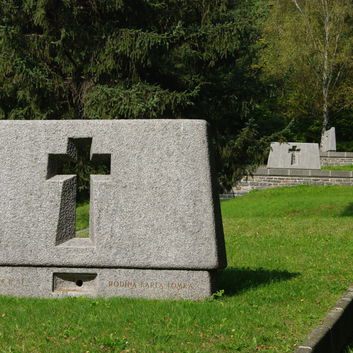 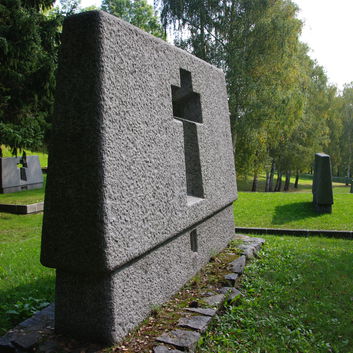 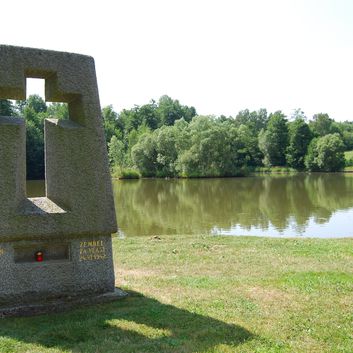 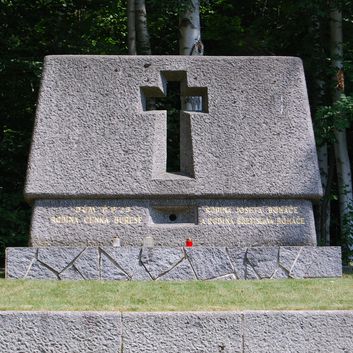 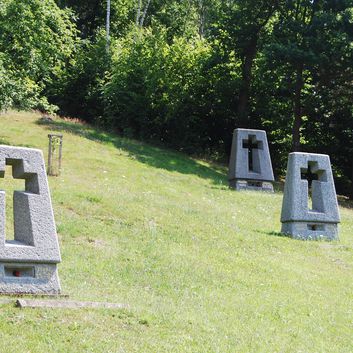 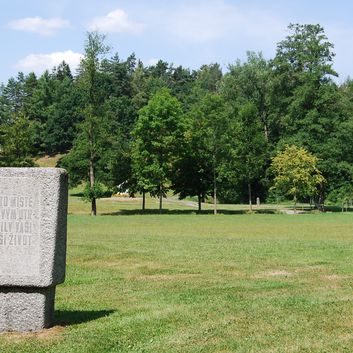 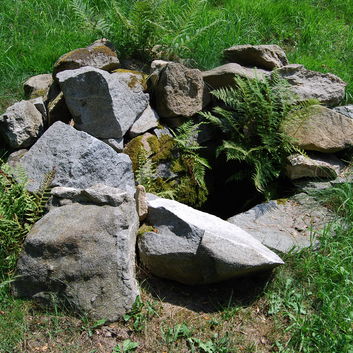 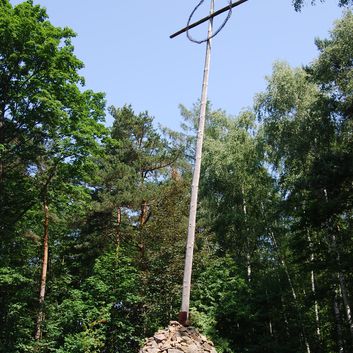 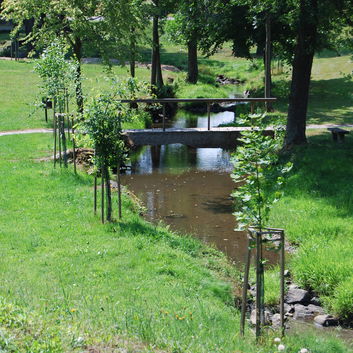 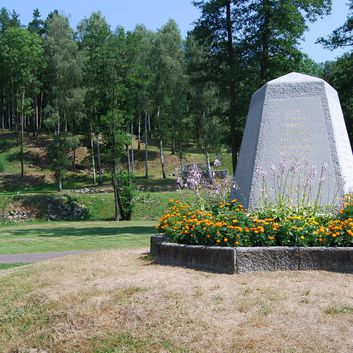 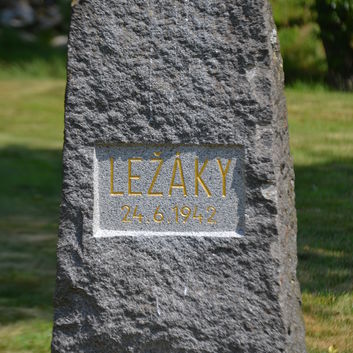 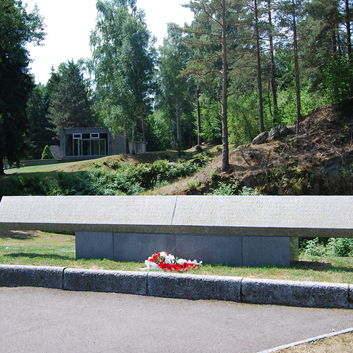