History of the hamlet of Ležáky

Ležáky nowadays a reverent area lays in Pradubice district, 30 kilometres southern from Pardubice at the area of Chrudim between the villages Miřetice and Včelákov. The name Ležák belonged to mill and also to the local brook and later also to the pond above the mill. Later on Ležáky also became a name of the colony. The oldest building, a remote place lying in the valley of Ležáky was the mill with sawmill that were firstly mentioned in 1714. The first two houses, one of Jiří Boháč with the house number 12 with a field and a meadow, and a house of Franc Hrabal with the house no. 11 with a meadow and a field, were built on the hillside above the brook in 1784. The written record about the first two houses of Ležáky is from the following year. In the process, especially in the nineteenth century the number of houses was increasing, both wooden and brick, for example numbers 23,26,27,28 and 29. There were never more than 8 houses and the ninth house was the mill with the number 26. In forties of nineteenth century its former owner Ignác Vybíral re-built it. Even though that there were no farms in the neighbourhood of the mill the building was prosperous even during both world wars.

A colony so small as Ležáky could never in the history manage itself economically and independently. The lives if its inhabitants always depended on cooperation with neighbouring villages for example Včelákovice or Miřetice that are closely related to the history of Ležáky.

The men of Ležáky used to go to make living to the close quarries. The first of those was opened in Dachov that was in the close neighbourhood of Ležáky- in 1942 it became famous as quarry Hluboká- and that was in the nineties of nineteenth century. In the neighbourhood there were in the process more quarries established. Hard plain granite used to be mined there and the stone-masons used to make cobblestones, kerbstones, tombstones and other products from it with their own hands. One of the localities was also well known quarry Čeník. All the places mentioned will become a part of the tragedy of Ležáky.

Women of Ležáky were famous for their embroidery that they used to take to Skuteč or Chrast for sale. Another option to make money- bor both men and women- were ancillary works for farmers from the neighbourhood during the harvest season.

Before the tragedy Ležáky were formed by nine buildings where 54 inhabitants lived. In the land register they belonged to the two neighbouring villages. The mill to the land register of village Dachov municipality Miřetice the rest eight houses to the village Hraboveč, municipality Louka. In accordance with this register separation there were schools in Miřetice and in Včelákov, the churches in Včelákov and in Vrbatův Kostelec. All inhabitants of Ležáky could use the railway station in Vrbatův Kostelec and the gendarmerie and the post office were seated there as well.

The last miller of Ležáky was Jindřich Švanda born in 1904 who in August 1937 married Františka Šťulíková born in 1909 who was a daughter of the former miller Václav Šťulík. The Švanda couple had two daughters, Emilie (born in February 1939) and Bohumila (born in April 1940) and they were living happily in Ležáky. Thanks to Jindřich Švanda the mill was infirm hands.

In the first floor of the mill of Ležáky there lived, until June 21 1942, the brother of Františka Švandová Josef Šťulík who was born in the mill in 1913 and who in June 1939 married Marie, maiden name Pelikánová a native from Včelákov. The Šťulík couple had two daughters, Jarmila born in November 1939 and Marie born in July 1941. Josef Šťulík received working experience as a stone-mason and opened a quarry on the property belonging to the mill.

At night on December 29, 1941the British airplane Halifax transported parachutists, members of Czechoslovak army in Great Britain, to the Protectorate. The group Anthropoid (Josef Gabčík, Jan Kubiš) were to carry out assassination on deputy Reich protector Reinhard Heydrich; the mission of group Silver A (Alfréd Bartoš, Josef Valčík and radio-operator Jiří Potůček) was to establish and maintain contact with London and to help national resistance. The leader of Silver A, Alfréd Bartoš established the headquarters in Pardubice where he had lived for several years with his mother, which was against the rules of conspiracy.

In January 1941 the radiator Libuše operated by J.Potůček radiated from the quarry Hluboká near Dachov which was in close neighbourhood of Ležáky. The protector of the quarry Jindřich Vaško and his brother František who was the leaseholder of Hluboká together with engineman Karel Svoboda were helping. Potůček was broadcasting from the double ceiling of the engine room under extreme conditions. Libuše was then moved to other places and afterwards it returned to quarry Hluboká but in April it is already placed at the mill of Ležáky where Jindřich Švanda was the miller. The radio-operator Potůček moved to the first floor to the apartment of miller’s brother in law Josef Šťulík. The head sergeants of gendarmerie in Vrbatův Kostelec, Karel Kněz with his inferiors are already cooperating with Potůček.

The parachutists Josef Gabčik and Jan Kubiš, most likely in cooperation with Josef Valčík, carry out an assassination on R. Heydrich on May 27, 1942. The state minister K.H.Frank- now delegated by Hitler to lead the protectorate- proclaimed an emergency: it comes on so called second Heydrichiade, a period of heartless terror. Heydrich succumbed on June 4 in Prague hospital na Bulovce. The search for the assassinators leads mistakenly and due to lies to Lidice that are on June 10 burned out by Nazis. Lidice men are shot, women dragged to concentration camps and children are for the most part moved to Lodž and later on death follows.

Due to denouncement, that was presented by parachutist Karel Čurda, a member of the parachutist group Out Distance, when he optionally called Prague Gestapo on June 16, wave of arresting focused on members of resistance and colleagues of “parachute agents”, which is how Nazis called parachutists, followed. On Wednesday, June 17, Luděk Matura from Svítkov came to mill of Ležáky on a bicycle to warn Jiří Potůček, švandas and Šťulíks. Towards morning of the following day the radio-station Libuše leaves the valley of Ležáky in a car, accompanied by Potůček and Jindřich Vaško. The radio-operator travels to North towards Červený Kostelec. Gestapo was following him eagerly. The odyssey of Potůček ended on June 2, 1942 when a Czech policeman shot him during his sleep in a grove between Trnová and Rosice near Pardubice.

Seven parachutists waited to see their death on June 18- it was also due to Čurda’s denouncement. It was a hero death, mostly carried by their own hands in the former orthodox church of Karel Bromejský in Resslova street in Prague. Among them there was also Josef Gabčík, Jan Kubiš and Josef Valčík. Nazis suspected that there was a connection between Valčík and the radio station Libuše even though that they could not prove that.

After Čurda’s denouncement also the Krupka couple, fellows of Alfréd Bartoš was arrested, members of Pardubice Nazi office scan registration forms of residence of Miřetice where Ležáky belonged in accordance with the land register, they are searching in the quarry Hluboká and in the mill of Ležáky. Gestapo or, based on their commands, Czech policemen arrest František Vaško with his wife, Jindřich Vaško, the miller Jindřich Švanda, his wife Františka, the engineman from Hluboká Karel Svoboda, Josef Šťulík and also his wife Marie and her parents with son, parents of Josef Šťulík Václav and Růžena Šťulíks and others. The head sergeant Karel Knět shot himself and also other fellows of the troopers committed a suicide.

Wednesday, June 24 1942 became the fatal day. In the morning an armed convoy of cars drew into the Pardubice Gestapo station. The mayors of Louka and Miřetice had to hand over police registration forms of Ležáky inhabitants to Gestapo, together with list of livestock and protocols of properties. At about half past twelve Ležáky were hermetically closed by SS units (approximately 500 people) and by Czech protectorate policemen. There was a check of police registration forms. Nazi gathered the inhabitants, mostly workers from quarries by the road that led through the colony. The children that were missing were escorted from school or eventually from relatives. Before five o’clock in the afternoon Germans transported 46 old men, women and children to the Castle. Afterwards they plundered in the colony thereupon they set up the houses into fire. The hoses were burning for the whole night. Following adjustments of terrain were ensured by construction company from Jičín.

Still the same evening Nazi murdered 33 inhabitants of Ležáky, 18 women and 15 men, near the Castle. Four people from Ležáky and more than forty fellows of the troopers were shot on June 25 and July 2, 1942. All 13 children were transported to Prague yet at night from June 24 to 25. Afterwards to detention camp in Lodž or eventually to children’s home in Pluščikov near Poznan. The sisters Jarmila and Marie Šťulíks were acknowledged as suitable for Germanizing and they were handed over to German families under different names. After the war the police inspector Josef Ondráček brought them to their homeland. Eleven children of Ležáky found their death on June 25 in a gas truck in Polish Chelmno and together with them also one girl from Lidice as well as before them 81 children from Lidice. The relatives of the troopers and their fellows in total 254 people were executed en masse on October 24, 1942 in a concentration camp Mauthausen. Murdering of Czech patriots in connection with heydrichiade continued in Mauthausen yet in January 1943. More men and women wither from the neighbourhood of Ležáky of from the region of Pardubice arrested ether as fellows of descend Silver A found themselves in concentration camps in Osvetim, Buchenwald, Ravensbrück and only some of survived.

At the beginning of March 1943, the quarry Hluboká was declared abandoned to the Reich and under the supervision of the chief of Pardubice Gestapo Clages it was sold under its value to his nephew K.H.Becher. Clages used to visit the quarry even in his civil clothes and he had a big interest about its prosperity. Also the former business – granite quarries of František Vaško became a part of Becher’s firm.

Since the end of October until the mid of December 1943 the remains of Ležáky were levelled with the ground by approximately sixty-five captives of work camps. During the liquidation works, one worker, Josef Bezvoda found money and weapons in two cans underneath a stone of house no. 13 where old and young Boháčs and Čeněk Bureš with his wife lived. The inhabitants hid it very well- Nazis did not find them neither when annihilating Ležáky on June 24 1942, not later.

Postwar development of Ležáky can be found here. 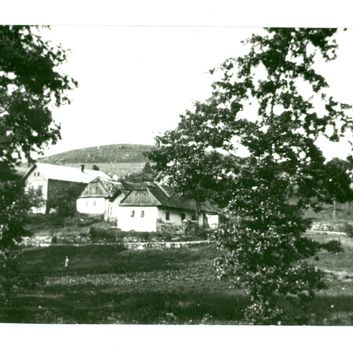 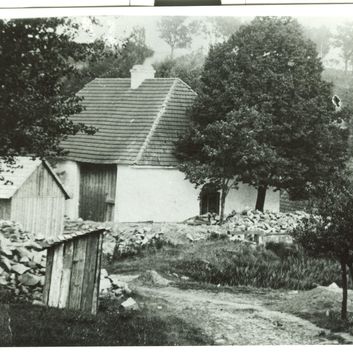 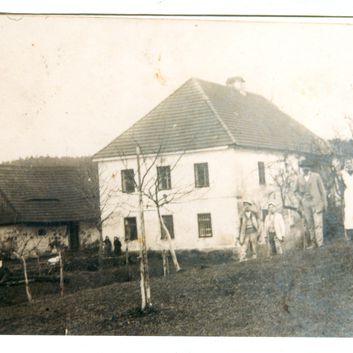 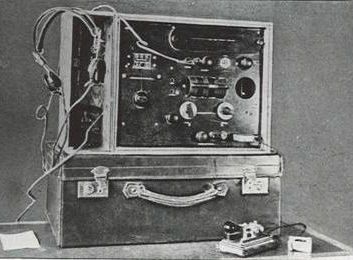 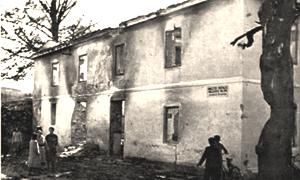 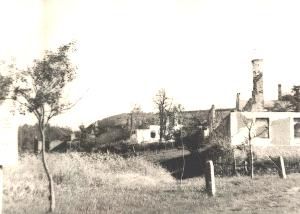 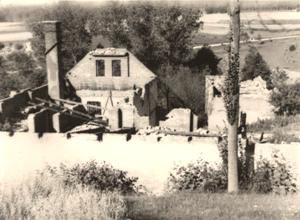